A few weeks ago, I met up with my father to spend a few hours detecting. We started out at the local fair grounds, which dates back to the early 1900's. After a few hours, we had a pocket full of clad and a 1937 Buffalo Nickel. We decided to leave and go check out an old house that was torn down in the early 90's.

The home originally sat between the highway and a canyon. To our disappointment, most of the original dirt and foundation had been washed into the canyon over the years. We weren't expecting to find much and after swinging the detectors for awhile we had found a lot of trash and no coins. We decided to call it quits and while walking back to the vehicle, something lying on top of the dirt had caught my eye. 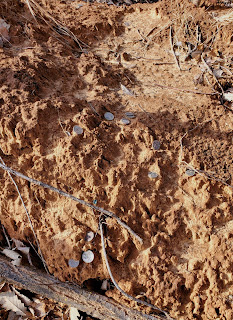 After getting a closer look, it appeared several silver coins layed on top of the dirt. Instantly, I had assumed that we had just stumbled onto an old cache of silver. Upon closer inspection, the coins were clad. A 2018 penny, a quarter, and a couple nickels layed right on the surface. We picked them up and ran our coils over the area and instantly knew there were more coins. We began digging, often picking out several coins at a time. With every handful of dirt we ran over our coils, we would find coins. We pondered on several questions as we dug. Why were there newer coins at an early 1900's site, how did they get there, and how many would we find? We dug for around an hour before our detectors finally fell silent.

After laying out and sorting through all of the coins, we had found a total of 371 coins, 213 pennies, 41 nickels, 72 dimes, 42 quarters, 2 wheat pennies, and 1 rolled penny. Now as much as I'd like to have found that many silver dollars, finding that many coins is a good day of detecting. As for how all those coins got there, the only explanation we could think of was someone had a jar full of coins in their vehicle and had wrecked off the highway, spilling all of the coins onto the ground. 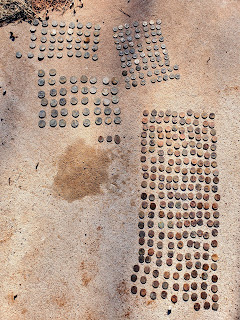 Finding this random cache of coins is a good lesson for any treasure hunter. Lost treasure is still out there. Sometimes there isn't a map or story with directions or clues. Who knows how much treasure, whether lost or forgotten, is just waiting for someone to stumble upon it?

Get out there and go find it!