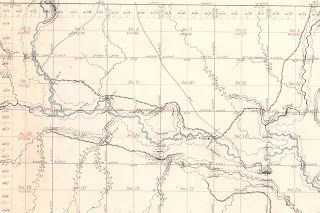 John Shuttlebar aka "Dutch John" was an early day Oklahoma Hermit. When he wasn't operating his ferry you could find him searching  for a bean pot full of gold and silver rumored to be worth $20,000 face value. The area he centered his search was near the junction of East and West Cache Creeks in Cotton County Oklahoma. According to the map, John had been given by his father who lay on his death bed, the money could be found in a triangle formed by three large oak trees.

Though Ol' Dutch John searched for the long lost money up until his death, sometime around 1918, he never was able to find the buried iron pot and small fortune it held. This would be a good treasure for a modern day hunter with a Schonstedt to go on the search for. More details can probably be found in old copies of the Temple Tribune.

Treasure Hunting Around the World

I get request for help with treasure sites from all over the country but in the past few months those request have been coming from all over the world. While I have helped with a Roman era treasure site in the past I have to admit I don't know much about Persian treasure. I'm kind of an outlaw and Spanish treasure kind of guy, so if any of our readers have experience with middle eastern treasure hunting feel free to e-mail me and I will get you in touch with our fellow overseas treasure hunting friends who are seeking help. If you may know of any books or websites that deal with this please feel free to contact me as well. okietreasurehunter@msn.com
Posted by okie treasure hunter at 7:37 PM No comments:

Back In Time: Lost Gold of Oklahoma

I thought the OETA guys did a great job of putting this show together. I've had a number of people express their desire to see more shows like it.

http://www.youtube.com/watch?v=uXPwLAbb2Fc
Posted by okie treasure hunter at 2:11 PM No comments:

There is a growing interest in treasure hunting, and judging by the number of hits the blog gets each time a show comes on tv, that interest is growing. Here's an online site that you can watch treasure hunters in action. http://www.ovguide.com/tv/treasure_hunters.htm
Posted by okie treasure hunter at 2:48 PM No comments: