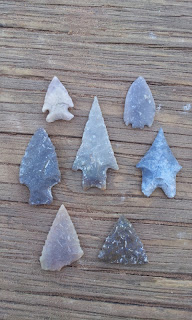 Recently I was invited to the hill country of south Texas to participate in a screen dig for artifacts. This is a controversial topic when it comes to artifact hunting. I can see both sides of argument. There is a loss of archeological information, but on the other hand it is legal in Texas to dig on private land and what is found ends up being displayed in private collections instead of hidden away in museum storage.

In Oklahoma digging for artifacts is illegal, so we are limited to surface hunting. I decided to make the trip since this would be a new experience for me and one of the last digs that would take place on the site we were going to.

We started our eight hour trip early in the morning so that we would have enough daylight to do some surface hunting once we made it to Barksdale. The trip down was filled with stories of finding points and a few treasure stories thrown in for good measure. I was prepared to camp out, but we decided to get a hotel room instead. While the room was clean and comfortable it was little more than a place to sleep. No phone, tv, wi-fi, or shower in my room. Just a tub that thankfully had hot water.

Early the next morning we we headed to the next town over for a quick breakfast. We were planning on surface hunting during the lunch break instead of eating, so I ordered a big breakfast of pancakes, bacon, eggs, toast, and hashbrowns. After stuffing my face we made the quick trip over to the dig site to unload our gear and claim our screen.

South Texas hill country has a rugged beauty all its own and the dig site was located beside the Nueces River. It would be a great place to build a vacation house but the $800,000+ price tag for the 100 acres seemed a bit steep for my wallet.

Nacho arrived with the skid loader and shortly after unloading it the fun began. I'm not sure what I was expecting, but once that first load of dirt hit my table I became aware that it was going to be a long day of hard work. You are constantly sifting dirt off the screen table in an effort to move through as many loads of dirt as possible.

My first find was a thin flake that had been worked into a point. Beginners luck was definitely working on my behalf. While it was slow going for those working around me, I was pulling some nice points out of my dirt. I had a nice variety of points collecting inside the protective case I brought along to put my points in.

Four hours later we stopped for lunch and a walk up the hill to surface hunt didn't seem like as good an idea as it was the night before. I made the decision to stay behind and clean up a few of the points I had found since there wasn't time to take a good look at them during the dig time. The quality of workmanship on some of the points was amazing. The rootbeer flint that is common to the area makes for translucent points.

Lunch was over and we went back at it. The area has been heavily dug so the last couple of hours provided very few points. Our dig time was soon over and I have to confess that I was ready to call it quits a bucket or two of dirt before that. I went down to the river to wash a few pounds of dirt off of my face. We knew that we had a long drive ahead of us and darkness was closing in, so we loaded up and headed out.

Other than a stop for some good bbq and gas it was an uneventful trip back home. I have to thank Brad, Jake, and Mike for inviting me along. They were good company and I did learn a few things. It was really neat to look at the cuts in the earth and see the different layers of campsites that have been used over and over again for thousands of years.

If you are interested in screen digging in Texas there are a few people operating pay sites. Nacho treated us good, but do your own research and decide if this type of hunting is for you.


Posted by okie treasure hunter at 11:23 AM No comments: 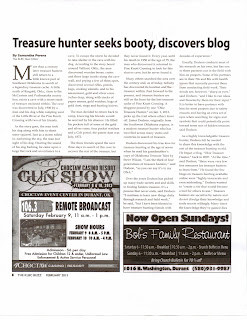 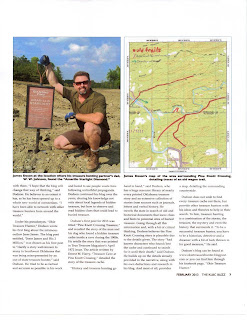 A special thanks to Samantha Perera.
Posted by okie treasure hunter at 11:37 AM No comments:

I am planning to attend the 2013 T.A.M.D.C. Treasure Show in Longview Texas. I hope to meet a number of my blog readers and fellow treasure hunters there.You can get all the details by going to www.tamdc.org or find them on facebook https://www.facebook.com/TAMDC2012

Posted by okie treasure hunter at 12:03 PM No comments:

It's with great sorrow that I tell of the passing of a friend and fellow treasure hunter, Larry Don Armstrong. Larry was a regular at our annual treasure hunter get together and stayed in contact through email. I could always count on him forwarding something interesting to my inbox. My thoughts and prayers are with his family. Larry will be greatly missed.


Posted by okie treasure hunter at 10:33 PM No comments: