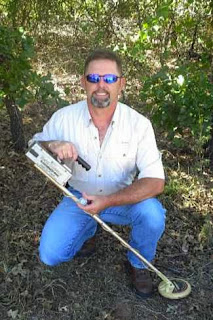 In May of this year my Grandmother Juanita passed away. Her husband Don was kind enough to give me a metal detector she had used for decades. As a small kid she would let me play with her detectors and read her Oklahoma Treasures and Treasure Tales book. This of course planted the seed for my love of treasure hunting. Not surprisingly the old Sears metal detector, made by White's Electronics, still works. It didn't even need a new battery.

It wasn't until 1992 that I bought my first new metal detector. It was a White's Spectrum Eagle and I must have been the only person on the island I was living on at the time, because I found so many coins that I was almost sick of digging holes.

Years later, in a moment of weakness, when I thought I needed a newer model, I sold the Spectrum to my aunt. I have regretted it ever since and she won't sell it back. I guess she knows a good thing when she gets it.

Just for kicks I took grandma's old Sears detector out and did a little coin shooting. The old machine doesn't have a lot of bells and whistles and depth was shallow, but it still pulled some change out of the ground. The dirty, old, beat up and battered detector now hangs in a place of honor among the newer and much more expensive machines. No matter how much technology advances this will always be my favorite machine. It was, and still is, part of my life. Just like my grandma has been.

Posted by okie treasure hunter at 4:36 PM No comments: 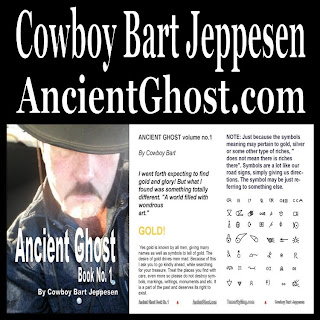 If you are looking for something new to read concerning treasure hunting, my facebook friend Bart Jeppesen has just the thing for you. He has written a five volume series that is loaded with treasure signs and symbols. While our treasure hunting styles may differ, I always enjoy reading about what others find out in the field. Bart has included explanations of symbols and plenty of photos. I've read the first volume and look forward to delving into the next four in the series. Add these books to your library and compare what he has found to your own experiences out in the field!

Posted by okie treasure hunter at 9:09 PM No comments: