Joe Hunter and his washpot full of silver ore 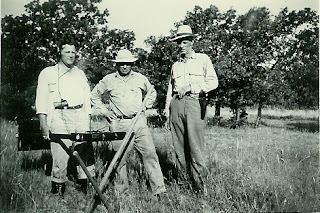 In August of 1948 Joe Hunter and Herbert Penick unearthed a wash pot full of silver ore. It was 65 pounds worth of ore to be exact. The old wash pot was two feet in diameter, 16 inches tall and half filled with ore. After digging numerous other holes Hunter found the wash pot, buried six feet down, just twenty paces from an old oak tree that was encircled by eleven rocks. Not far from the site was the outline of an old dugout rumored to be used by the James Gang.

Joe claimed the ore was found just 98 yards from the place he dug up the brass bucket that had the outlaw contract chiseled into it's sides. Personally, I feel that Joe was misleading folks with that bit of information since the brass bucket was found on federal land and the silver ore was on private land.

I have held the outlaw map that Joe used to find this ore and I know that there are several more caches of gold coins waiting to be found. It's just one more of my many projects I need to get to. So many sites to hunt and so little time. You just have to love Oklahoma and it's rich history of hidden treasure.

While I have been disappointed in the History Channel and their shows about treasure, Jesse James, and etc. I still have hope that Hollywood will come up with a few more good shows that will be truthful and entertaining.

Take that bunch in Alaska searching for gold. I eagerly awaited each new episode just to see how bad things were going to go for them. It was like watching episodes of a disfunctional Brady Bunch. I've got my dvr ready to record the new season.

The "Decoded" show is another one that leaves me perplexed. Some episodes they ask really tough questions and do a good job of investigating and on others it seems as if they left their brains back at the office.

How about the new show "Buried Treasure"? While the name is a bit misleading I still find it to be a good show. The brothers seem to be sincere in their desire to help people find items of value setting around their homes.

My question to our readers would be,if you could create a tv show about treasure hunting, what topics would you want to see?

The reason I ask this question is that there is a production company looking to produce a new series that will include treasure hunting, battlefield archaeology, wreck diving, etc. Believe it or not, people who are into television production are reading this blog and this may be your chance to let them know what you as viewers would like to watch.

I would like to see someone dig up a real treasure and not just a few old coins in a fruit jar they buried in the ground a few weeks before filming began.
Posted by okie treasure hunter at 8:26 AM 2 comments:

Just to update our readers on how fast our blog is growing. According to Xmarks Beta we are ranked #23 among treasure websites. This is surprising since we are little more than a homegrown blog site. We are ranked behind such well known websites as Whites Electronics, Treasurenet.com, GPAA, and other big companies. Note that these are dot com websites who have webmasters and are in it for a profit. I'm proud to say this blog isn't too shabby for a couple of guys who are doing this for free.
Posted by okie treasure hunter at 2:19 PM No comments:

I have added a Facebook gadget towards the top of the blog page for "Okie Treasure Hunter". I created this for all of those who would like to join as friends just to see how big our treasure hunting community is. I'm not a big facebook user but I'm trying to get with the times.
Posted by okie treasure hunter at 9:51 PM 2 comments:

While we mainly deal with land locked treasure I do have an interest in sunken treasure. A few weeks ago I was researching old newspaper articles and came across a story from 1907. It seems that in the 1800's a steamer named Golden Gate was sailing along the east coast of Mexico when a fire broke out in the engine room. The Golden Gate was carrying a cargo of $4,000,000 in gold. In an attempt to beach the ship the captain headed to shore where the ship burned at the waters edge about 17 miles north of Manzanillo, Several attempts where made at recovering the cargo. From what I can find about $1.4 million was recovered. A little more research should reveal more information about what became of this wreck. If nothing else this might be a fun area to go dive in hopes that something good was left for a lucky treasure hunter. 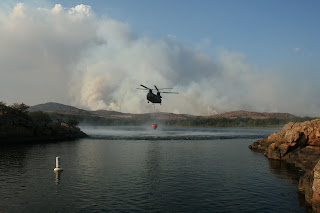 The blog will be idle for a few more days as I help with the fire fighting efforts here in Southwest Oklahoma. Please keeps all the firefighters and families who have lost their homes this year to fires and natural disasters in your prayers.
Posted by okie treasure hunter at 10:47 PM 1 comment:

Samuel Jackson King lived an isolated life keeping a pack of fierce dogs and a loaded gun at his side. Signs leading to his home read "Keep Out", "Beware", and "This Means You". Samuel rarely ventured into town, choosing instead to remain on his farm. The 107 acre King Farm lay just ten miles away from Mt. Davis in Somerset County.

Samuel was found in a field with a loaded shotgun at his side and his favorite dog who had remained beside his masters body for three days. A search of the house by the sheriff revealed that King liked to hide his wealth. Nearly $18,000 in bonds, old currency, gold and silver coins were found stashed away in old jars, tin cans, ten gallon ice cream can, backs of pictures, etc. I have no record of anyone searching outside of the home, but local newspapers from the time might shed more light on the story. Mr. King passed away in August of 1952.

A records search at the Somerset County Court House should give you the exact location of the King Farm. Having hidden that much money inside the house, there's a good chance much more could be recovered outside of the farm house.

September 1, 2011 at 7:00 pm central time the local (Oklahoma's OETA) PBS channel will have a program called "Back in Time" the episode is called "Lost Gold of Oklahoma". It will feature details of the little known Oklahoma gold rush and treasure hunting. If you happen to miss the program you can go to http://oeta.tv/ to find the next time it's scheduled to play.
Posted by okie treasure hunter at 10:06 AM 3 comments: