Sanborn maps can be a valuable tool for cache hunters, coin shooters, and privy diggers. While most sites charge for these maps there are a few that you can get for free. You may also check with your local library to see if they may have a subscription to one of the pay sites so that you can access it for free.


Posted by okie treasure hunter at 11:17 AM No comments:

While many of us are aware that the current administration is busy working to take away our second amendment rights, few are aware that the EPA and BLM are working hard to strip away your right to gold prospect and treasure hunt. Daily battles are being being fought at the state level to preserve the simple hobby of metal detecting as well. While the NRA is a well organized and funded lobby group with a media presence, we treasure hunters have a voice crying in the wilderness as well.

WWATS is hard at work fighting for our rights to pursue the activities we enjoy. Wayne "NuggetBrain" Peterson is the new president and has taken an active roll in amping up the efforts in the fight that WWATS is engaged in on our behalf. Please take a look at their website http://www.wwats.org/ and find a way to help in any manner that you can.

How to Research for Treasure Hunting & Metal Detecting 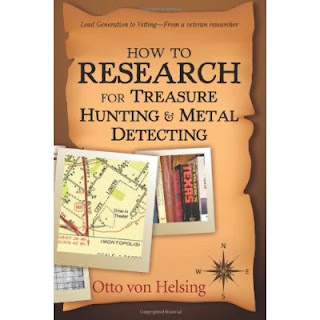 This book should be required reading for the beginning treasure hunter or the seasoned veteran. Long overdue in the field of metal detecting and treasure hunting. It's refreshingly straight forward and politically incorrect. I would have recommended it just for the chapter dealing with the KGC alone, but this book has so much more to offer.

I actually have mixed feelings about reviewing this book. The author has revealed many of the research links and methods that I have held as closely guarded secrets for my own research over the years, but the purpose of this blog is to be a tool for other treasure hunters and this is one tool you shouldn't be without.

With 25 chapters dealing with everything from obtaining treasure leads, map resources, common sense & treasure sense, and internet searching you can't help but learn something new. Otto Von Helsing gives you the formula and methods to be a successful researcher and this is a book I will be using myself in a never ceasing effort to become a better treasure hunter. Available at http://www.amazon.com/gp/product/1480186775/ref=as_li_qf_sp_asin_il?ie=UTF8&tag=treasurehuntingresearch-20&linkCode=as2&camp=1789&creative=9325&creativeASIN=1480186775 and reasonably priced. This book will pay for itself many times over by saving you time, money, and helping you find the good stuff. You may want to check out the authors website at www.treasurehuntingresearch.com

Good Luck and Good Hunting!
Posted by okie treasure hunter at 9:36 AM No comments: 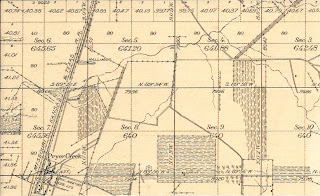 Near the site of the Pryor Creek Creek water tank on the Missouri, Kansas, & Texas Railroad lies a $135,000 cache hidden by the Meadows Gang. The gang had accumulated the approximately four hundred pounds of gold and silver coins from several hold ups they had pulled in the area.

While resting near the water tank they decided to bury the cumbersome load for safe keeping. Shortly after this this the gang was captured with several gang members turning states evidence against Meadows, who ended up serving 18 years in prison.


After his release he came back to the Pryor area searching for his hidden loot but there was a lot of area around the tank and the area had changed during his nearly two decade prison term. Meadows was sure the money was still there but had sunken to bedrock in the soft soil.

A search of old MK&T RR maps may show the location of the water tank or a trip to the county courthouse to research what records they may have. With todays pulse induction detectors and other equipment this is one that someone with time and energycan recover and with todays gold and silver prices would be well worth the effort.
Posted by okie treasure hunter at 12:08 PM No comments: 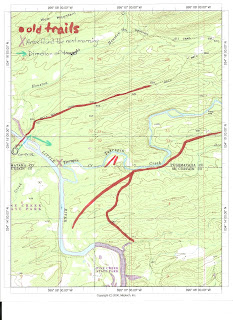 Just a few miles north of Ringold Oklahoma near the McCurtain/Pushmataha ﻿county line is a cave that was found and then lost a little over a century ago. This is one of those treasures I think is really there to find. The story goes that three men were camping on the west side of Little River at the Pine Knot Crossing. It was getting towards evening on a hot July day in 1900. Storm clouds were building to the north of the camp but one of the men decided to do a little squirrel hunting to before dark. Taking his dog and shotgun he crossed the river and then headed southeast into the dense forest.

About an hour or so later the man had bagged a couple of squirrels and decided to head back to camp. All of a sudden the dog spied a rabbit and gave chase. With darkness coming on and a storm rolling in the man knew he had to find his dog and get back to camp. Taking off in the direction of his barking dog he began to descend into a small valley with high walls but had to stop because a rock wall was blocking the trail.

A large flat rock caught his attention and upon moving it he could feel a cool breeze. Clearing more rocks out of the way revealed a small opening into a cave. Just then lightning struck a tree behind him. The man decided it would be better to be inside the cave than outside it. After crawling into the cave for a ways it opened up so that a man could stand upright. Finding some branches inside the cave the man decided to build a small fire. The fire lit up the interior of the cave and this is when the man discovered a stack of narrow wooden boxes against one wall. There were also three large trunks along with other wooden crates. Prying open one crate he found six new Winchester repeating rifles chambered in 45-70. Other crates contained rifles, pistols, and Sharps .50 cal buffalo rifles. There was also a scattering of saddles, kegs, and cooking utensils, but it was the three large trunks that held his attention.

Two of the trunks were locked but he was able to pry the third one open. The top tray contained an assortment of gold pocket watches. The bottom of the trunk was covered several inches deep in gold and silver coins. There was also a stack of paper money, more watches, revolvers, bags of gold dust, rings, and hunting knives. It was past midnight by the time the man had recovered from the shock of what he had found. Knowing his friends would be worried he made the decision to head back to camp. Stuffing his pockets full of gold and silver coins along with four pocket watches and a Colt pistol with a patent date of July 12, 1872 he crawled out of the cave into the darkness and rain.

Of course as with any good treasure story this is where the man becomes lost and is eventually found early the next morning about a half mile south of the camp but on the east side of the river. Excitedly he showed the other two men the treasure he had collected. For the next three days the men searched for the cave with no luck. Each year the man returned to the crossing searching for the cave until his death in 1950 at the age of 75.

I think by taking a few of the clues that are provided you can cut the search area down to a manageable size. The first thing that comes to mind is that the large trunks and crates of rifles were probably transported by wagon. Using a very detailed survey plat from 1898 I found that two of the wagon roads from that time frame are still in use. I have marked the old trails in red. They would have used one of the roads to get as close to the cave as possible.

The second thing is the amount of time he spent traveling before deciding to return to camp. At a moderate pace you can easily travel four miles in an hour, but he was hunting in dense tree cover on hilly terrain. Due to the time of day, approach of the storm, and the risk of being cut off from camp from rising river waters I doubt he traveled more than two miles. He was moving in an southeasterly direction after crossing the river which would put him closer to the road south of Terrapin Creek. He was also found the next morning near the junction of Terrapin Creek and Little River.

He was descending into a small valley which puts him at a higher elevation. This also plays well with the part about lightning striking a tree behind him while at the cave entrance. There would have been a higher chance of strikes at the top part of the hill. He would have been traveling in a westerly direction for his return trip. He was on some sort of trail which could still be there today.

The cave itself is sort of a clue. Obviously it was being used as some sort of headquarters. Since there was a cool breeze coming out of it this should indicate a second opening. Whoever was using it would have needed water and a place to keep the horses close at hand.

One thing that caught my eye on the 1898 survey plat were two small lines in a bend on Terrapin Creek  " marked in red on my map" that were traces of a wagon trail. This wasn't part of the main road and the creek can be crossed on the east side of the bend. If I were to search for the cave this is the area I would search first. You can find the old survey plat by using the links section on this blog.