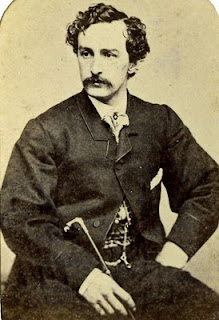 What does John Wilkes Booth have to do with treasure you might ask? Well, there is a hidden treasure of a different sort waiting to be found by the persistent treasure hunter. This one isn't gold, silver, or rare jewels but items of historical value that would be worth more than their weight in gold.

During the twelve day manhunt for Lincoln's killer, Booth and his accomplice hid themselves in a pine thicket for five of those days. It was during this period that the horses, that J. Wilkes Booth and David Herold had ridden to make their escape from Washington D.C. after the murder of President Lincoln, were put down. The horses were killed still wearing the saddles, bridles, and bits used during the daring get away. While the leather has more than likely rotted away, the metal parts should still be intact. These items would be of immense historical value!

In a quicksand morass about a mile from the pine thicket lay the skeletons of the two slain horses. The question is where do you start searching? Well for our fellow treasure hunters in Maryland you can get a quick head start on the rest of us. The pine thicket was located about a mile west of Rich Hill which was the farm of Colonel Samuel Cox. With some internet searching I'm sure the farm and thicket can be located and a quick study of a topo map should narrow the search area down to manageable size. A quest of this sort might even be made into a History Channel show.

Now for you KGC conspiracy guys who believe that Booth didn't die as history records, but was killed Jan. 14th 1903 in Enid Oklahoma by none other than Jesse James aka J. Frank Dalton. I suggest you you read Manhunt by James L. Swanson. After reading this very well researched and written book I think you will come to the conclusion that Booth really did die as history says. The death of David E. George who was the Booth impostor who committed suicide in Enid in 1903 was colorfully woven into one of the many lies that Orvus Lee Houk told during his many years as a Dalton promoter.

I would be happy to help anyone interested in searching for the remains of the horses to narrow down the search area. I haven't taken the time to look for it myself, but I would enjoy the challenge. The exact spot Booth hid out in the pine thicket would also be a good spot to search. This could also be narrowed down to within 50 yards or so just from clues found in the book.
Posted by okie treasure hunter at 12:23 AM

It was said after George was embalmed, he was placed in a chair in the window of the furniture store so that the public could view him and take pictures of him. Then he was leased out and even displayed at the St. Louis World's Fair in 1904 and also at many sideshow carnivals. The body then eventually disappeared. Sounds like another Elmer McCurdy.

The mummy of George was last seen in public in 1975 in New Hope, PA. It was purchased by a private collector who lives in Maryland. His name is known to very few. He has several mummies in his collection as well as shrunken head, carnival paraphernalia, and other macabre collectibles. The current owner says that the mummy's height is too tall for Booth and the mummy has beautiful blue eyes. Booth was said to have dark eyes.